TUNE Black Foxxes - Manic In Me 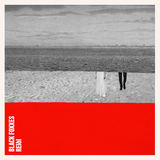 Black Foxxes release new single ’Manic In Me’, which is issued via Search and Destroy Records with an impact date of 30th March 2018.

Black Foxxes have released a new single, ‘Manic In Me’. The song is the follow up to last year’s ‘Saela’ and offers a further taste of what is to come from their second studio album, ‘Reiði’. (an Icelandic word meaning ‘anger or rage’ and is pronounced ‘Ray-dee’)

Mark Holley, Black Foxxes frontperson, says, “This song is purposefully written to have a pop structure, I wanted the song to sway back and forth in a repetitive manor to inject the listener with the hooks. The song is about balancing inner rage and calm. ‘You are the weather’ refers to feeling still and serene amongst another’s company. ‘I am the manic in me’, quickly interjects that, on my own, I can’t control the inner manic. It’s this back and forth that continues throughout the song, quickly transitioning between verses and chorus without any chord changes, keeping the listener guessing which side the coin will land. Calm or manic.”

Black Foxes will be touring the UK and Europe throughout March and April in support of their new album and headline London’s Heaven on Friday 6th April. Full list of shows below