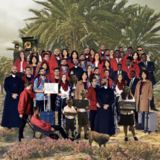 London duo APRE have unveiled new track ‘Gap Year 2008’, which is available now. Alongside acclaimed recent single ‘Backstreet’, ‘Gap Year’ will form part of the band’s third in a trilogy of introductory EPs (following ‘The Movement Of Time’ and ‘Drum Machines Killed Music’). Having opened for the likes of Sam Fender and been confirmed to tour with Sea Girls, APRE have already been confirmed to take their formidable live show to this year’s SXSW, The Great Escape, Live at Leeds and Bushstock. Their headline UK headline tour – including a London show at Omeara on April 3rd – kicks off this March.

First airing today, ‘Gap Year 2008’ shows off the more introspective side to APRE - a blend of the acoustic, electronic (and nagging pop chorus) that still walks that line between the everyday and the escapist, which is integral to APRE. ‘Gap Year 2008’, say the band, “is about getting away from reality to find yourself, but realising you were better off where you were.”

Across just a handful of early releases, APRE have announced themselves as one of the UK’s most potent, intriguing new bands. Frequently twisting those most private moments into songs full of brains, heart, and laser-guided melodies, you’d be unlikely to trace APRE’s origins to the backroom of a West London chess club, and yet that’s exactly where the story begins. Charlie and Jules – co-vocalists, co-producers, multi-instrumentalists – were no strangers to making music individually, but it wasn’t until Sue who ran the club suggested that they hook up that the unique sound and relationship of APRE started to fuse together. “She knew that we shared the love of the same thing,” recalls Charlie, which turned out to be everything from noughties outfits like Foals or Mystery Jets to 80s pinups Tears For Fears or The Police. Making ends meet however they could in the meantime, APRE – and that Ealing room – became an exercise in escape: “the fun side, where we could go and truly be ourselves”, utilising a DIY spirit, terrible equipment and the sort of intimate sentiments they’d seldom voice in public to reach for the same level of world-conquering pop they were raised on.

As introduced in the recent ‘Backstreet’ video, part of what makes APRE special is an eye for detail that looks beyond just the immediate songs they make. The band’s imagery is often shrouded in suburbia, but with a surreal, sometimes-dislocated edge (where outsider and insider are unclear). Even the band name itself begs questions (one version goes that it was inspired by a French girlfriend who kept saying Apres, whilst another interpretation might be that it drops you into a story always evolving, neither at its beginning nor its end). As with any genuinely-aspirational band, everything in APRE’s world matters and yet to the outside eye, not everything makes total sense - which is precisely the point (“none of us really know what we are doing anymore”). With songs which take charged emotion, heartfelt ambition and a refreshing embrace of the ludicrousness of the present day – its paradoxes, problems, but also the potential to truly transform your situation (imagining a stadium where stands a chess club) – 2019 is already setting up to be APRE’s for the taking.